EMERGENCY 2017 begins in a historic mini-campaign in Hamburg in the 17th century. The player rescues people from the witch hunt of an angry mob with the city watch. 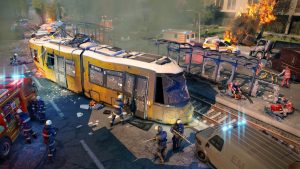 In modern times, EMERGENCY 2017 is more up-to-date than ever. The threat of international terror is growing everywhere in the area of operation. In exciting and demanding missions, it is about warding off dangers, containing damage and maintaining public order.

In addition to the well-known units a police dog team (with its own vehicle) supports the emergency personnel. It can not only find injured persons, but also detect dangerous bombs.

EMERGENCY 2016 comes with a new double campaign that demands the player as a rescuer: The plague rages in medieval Cologne. With the plague doctor, the player contains the deadly plague. 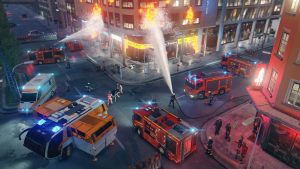 After centuries, the treacherous epidemic breaks out again. One metropolis after another is in danger of becoming a quarantine zone.

The player combats the plague with today’s means and brings the outbreak of the disease under control to save the inhabitants of its cities.

EMERGENCY with a new editor

In the course of the comprehensive EMERGENCY 5 campaign, smaller accidents alternate with large events and provide many hours of exciting fun. A cooperative game mode also allows up to four players at a time to solve special multiplayer events.

One of the highlights of EMERGENCY 5 is the newly developed editor. With the editor, players can create their own content (mods), which can then be integrated into the game. For the first time it is even possible to work with other modders at the same time on the same project. 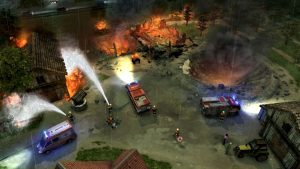 Additionally it features new spectacular videos and new units, such as extinguishing helicopter and the historical horse team with fire engine.

The ultimate EMERGENCY collection with much new and exclusive content: 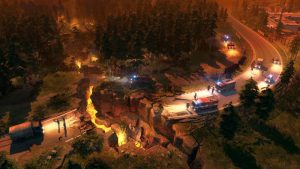 In EMERGENCY Mobile (iOS, Android, Kindle), the player assumes the role of the chief of operations and has to coordinate rescue teams in 13 disaster scenarios. 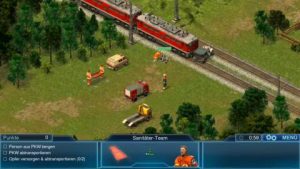 At the beginning of each mission, it is important to get a quick overview of the situation at the scene of the accident. Firefighters, police and rescue workers are ready to extinguish fires, secure the site, treat and transport injured persons.

Comic-style simulation game for the Nintendo DS. With police, fire brigade, ambulance and technical support service children can prove their skill in dealing with fires and natural disasters in exciting missions. 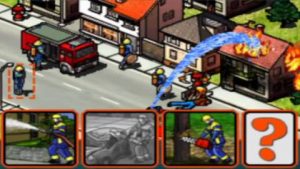 EMERGENCY 2012 includes 12 exciting missions and in the Deluxe version an additional mini-campaign consisting of 3 further missions. 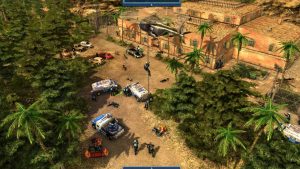 Graphics and controls have been improved compared to its predecessors.

After being awarded the German children’s software prize Tommi 2009, the learning adventure for the television series by popular TV host Willi Weitzel won the “Serious Games Award” in gold at CeBit 2010, making it one of the most awarded children’s and youth games in Germany. 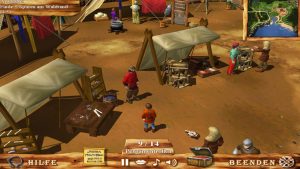 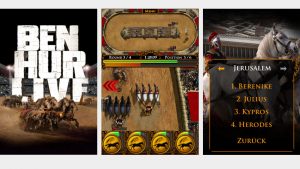 As a gladiator and driver of a four-in-hand race car, the player can expect gripping races against fierce opponents in the ancient arenas of Rome, Egypt and Jerusalem.

The players avoid obstacles and give their opponents the whip to win the biggest chariot race in history.

The implementation of the successful board game “Keltis – The way of the stones” by the cult game author Reiner Knizia for PC and Nintendo DS. 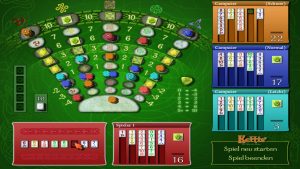 The goal of the game is to advance as far as possible on the stone paths by cleverly pulling your own pieces and to collect many points.

In addition to the proven gameplay, the digital implementation also offers a specially developed Solitaire mode and a variety of playable awards.

The game offers various single and multiplayer modes with varying levels of difficulty.

The popular board game “Einfach Genial” by cult game author Reiner Knizia for PC and iPhone. 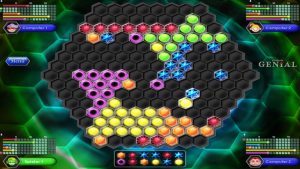 By clever combination of color rows the player conquers the playing field. The more color symbols you have next to each other on the fields, the more points you score.

“Einfach Genial” contains not only a completely redesigned interface design, but also an improved artificial intelligence and a novel tournament mode. 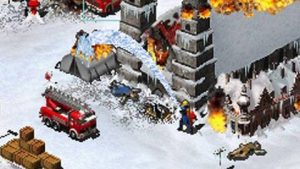 5 different areas divided into 4 operations each offer a total of 20 exciting missions about saving lives and preventing disasters. The game has a highscore system so players can compare their achievements with others.

Nominated for the “Deutscher Computerspielpreis” in the category: “Best Handheld Game”

The world at the end of the 21st century. California has seceded from the US after a civil war and is being controlled by a totalitarian police state under dictator Lou Baxter. Opposition and dissenters are systematically persecuted and innocently imprisoned. The prisoners have only one way out – participation in the cynical gladiator’s television show hosted by dictator Lou Baxter. 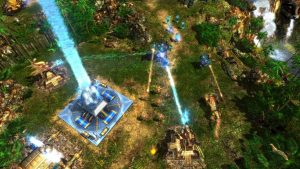 The Show takes place in a fantastic future world with high-tech weapons and giant mechas. The battles take place on a huge island where artificial landscapes are the result of state-of-the-art holo technology. The focus of THE SHOW is on tactics, strategy, numerous fights and fast action.

In this real-time strategy hit, the player assumes the role of the task force leader. He has a large number of emergency vehicles and personnel in the areas of fire, rescue, police and technical assistance. 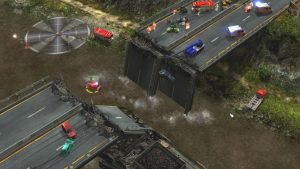 For the first time, the 20 missions of the campaign are embedded in an endless play around a living city with many coincidences and tasks. Realistic times of day and weather conditions: Flowing day-night changes and constantly changing weather conditions, a multitude of events that are always developing dynamically.

Spectacular foreign missions in the Antarctic and the Middle East: the scenarios range from medical emergencies, traffic accidents and major fires to earthquakes and floods. In addition, the game has a multiplayer mode and new controls.

With the deluxe edition, it is now also possible to control the task force by voice command.

In the third part of the popular EMERGENCY series, players can now view the action for the first time in freely rotatable and zoomable 3D graphics from all directions. 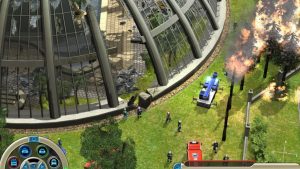 In addition to realistic lighting and weather effects, the third part of the rescue simulation features the new freeplay mode, in which randomly occurring emergency situations have to be responded to at lightning speed in order to maintain control in the area of operation.

In addition to the well-known units of the fire brigade, police and ambulance service, Technical Service volunteers are now also available to the player.

It is not a sports game.
It is no ego-shooter.
It is more.
It is Gotcha! 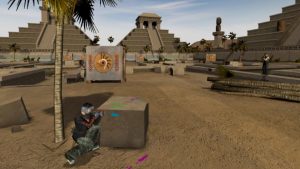 It’s the toughest tournament in the world: The Supercup of the International Marker Sports League. Players compete against the toughest Gotcha players in the world, on a rig on the high seas, on the 85th floor of a skyscraper, or in a medieval castle ruin. Teams of 20 players with different characteristics are fighting for the IMS League Supercup.

Released for PC and Xbox

The second part of the successful strategy game series EMERGENCY. Fast and consistent action in the fight for human lives is needed now. 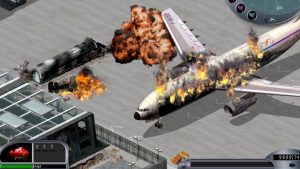 The skillful coordination of firefighters, police and ambulance forces will save people and prevent disasters.

The player takes on the role of a special police unit in EMERGENCY Police, gaining full control of up to 40 different vehicles and forces such as snipers, police psychologists and police helicopters. 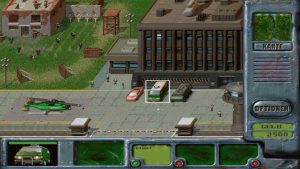 In 15 scenarios, varied orders are waiting. Capturing a runaway lion, curbing mass poisoning at a folk festival, or rescuing hostages.

EMERGENCY – Fighters for Life is the first part of the successful EMERGENCY series, which is now a classic German computer game. Organizational talent and strategy are needed. Players coordinate emergency and rescue teams of the police, fire brigade and technical assistants. 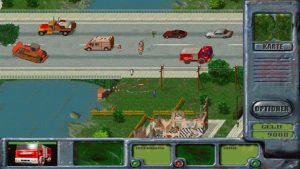 EMERGENCY – Fighters for Life became a bestseller not only in Germany, but throughout the world. Products from the EMERGENCY series have since appeared in many languages and on all continents, and EMERGENCY variants are also available for handheld consoles.

On a small dreamy Caribbean island, players use corruption and dirty tricks to gain power over the island.

But then they should get away from his tropical island paradise as fast as possible!

This fun adventure takes place in a computer. The protagonists Jeff and Donna are beamed into their PC and have to find a way out – they learn a lot about the inner workings of a computer. 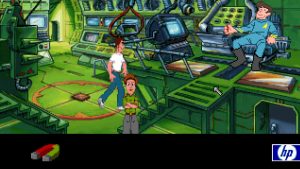 Jeff Jet was developed as a promotional game for Hewlett Packard.

MAD NEWS is one of the most acclaimed computer games in the field of business simulations. 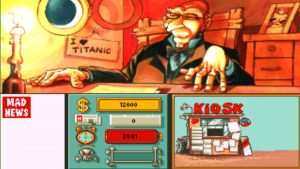 The game combines humor with routinely rendered graphics and has become the top hit and evergreen in sales statistics.

A game about the general election

In “Hurra Deutschland” the player assumes the role of the hitherto completely unknown Chancellor candidate Paul. 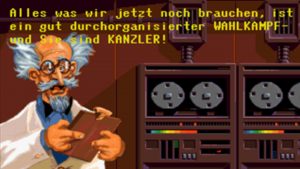 From now on, they will only have a few days left to pursue their campaign, draw the people to their side, uncover a conspiracy, and save the entire Republic and themselves. 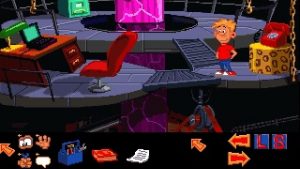 The popular detective adventure was developed as an advertising game for the LBS and plays in the Chicago of the 20s. 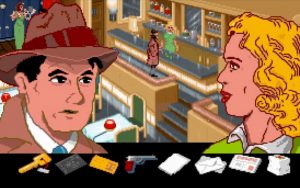 The player assumes the role of a private investigator and rescues the young waitress Rachel from a gangster boss.